This vegan spicy peanut, potato and black bean soup can be prepared simply in the slow cooker or stove top.

The aromas that are produced by this appetite stimulating soup are just amazing.

This hearty, wholesome soup is the perfect welcome to arrive home to especially after those long busy days.

Peanut soup, or often prepared as a groundnut stew, originates from many countries around the world including Africa, South America, Asia and some regions of North America.

Peanut soup or stew from West Africa often contains ingredients such as tomatoes, various spices, herbs and chilli's, and veggies such as okra. Meat is often added.

More or less while devising the recipe my thought processes were kinda like:

OK I want to try a spicy peanut soup and keep it simple but wholesome, and use whatever ingredients I have in my pantry. So canned coconut will bring the creaminess, peanut butter... well the essential peanut flavour. But as I used crunchy peanut butter it also contributed tasty texture. To bring the spiciness without resembling too much of a curry I decided chilli powder would be simple and ideal. To save time chopping I decided to add onion and garlic powder.

Black beans and brown lentils went in as I love adding beans and lentils to almost everything. I chose white potatoes as they are absolutely amazing cooked in a slow cooker soaking up all the savoury flavours. The sweetcorn was an after thought as while preparing the soup I suddenly thought of the solitary corn cob that had lurked in the fridge for a few weeks. So I grabbed it, skinned the corn off with a knife and popped the kernels in.

So basically that was my inspiration! And it all worked beautifully.

It is so easy to prepare slow cooker vegan spicy peanut soup. First the coconut milk, veggie stock, peanut butter, onion, garlic and chilli powders are added to the slow cooker and mixed together until smooth.

Next in are the chopped potatoes, carrots, sweet corn, brown lentils and black beans. The contents are seasoned with salt and pepper, mixed well, and the slow cooker lid popped on.

The soup is initially cooked for 3 hours on high, but can be set to medium heat for 4-5 hours or low heat for 6-8 hours.

While the kale is cooking the peanuts are toasted in a small pan. This is very easy and takes only a few minutes.

Heat a small pan over a high heat, lower the heat to medium and pop in the peanuts. Shake the peanuts almost constantly so that they become tinged with golden hues and not burnt, after a minute remove from the heat and continue shaking for a few seconds.

Next the coriander or cilantro is chopped, and the lemon sliced into wedges, just enough for each serving.

After 30 minutes the kale should be perfect. The slow cooker lid is removed and the soup left bubbling until ready to serve.

If your not hungry yet the aromas that this spicy peanut soup creates while simmering slowly away are simply amazing and guaranteed to stimulate the appetite.

Each spicy peanut soup bowl is garnished with toasted peanuts, coriander and a wedge of lemon. The soup is delicious with a little lemon zing squeezed directly in the bowl.

Of course other garnishes can be added and a few suggestions are included below in the recipe notes. I also like a sprinkle of red pepper flakes.

Alternatively simply serve the spicy peanut soup with a slice of wholemeal bread or your favourite crusty bread.

This recipe is enough to feed 4 very hungry people. However with accompaniments and garnishes the soup could stretch to 6 portions as it is a very satisfying and hearty soup.

If you'd rather prepare this spicy soup on the stove-top then check out the recipe notes as I have outlined an easy method.

How do I store leftover spicy peanut soup?

Leftovers can be stored, covered, in the fridge for up to 3 days. Or frozen in a freezer-proof container for 4-6 months. Defrost before reheating.

How do I reheat spicy peanut soup?

Reheat leftover peanut soup by bringing to a simmer in a saucepan, lower the heat, and gently bubble for 3-5 minutes until piping hot throughout.

Add extra veggie stock or coconut milk if you'd like to thin the soup a little, perhaps to stretch out the leftovers to several portions.

Can I prepare this peanut soup on the stove top?

Of course. Simply add all the ingredients, except the kale and peanuts, to a soup pan and simmer gently for 25 minutes. Ensure that you start with enough liquid to cover the potatoes.

After 25 minutes add the kale and simmer for an extra 5 minutes.

Add extra veggie stock or coconut milk if desired so that you achieve your desired consistency.

Less liquid will result in a much thicker soup, but many prefer a thinner soup so simply add small amounts of extra liquid until your happy.

Can I cook this spicy peanut soup for longer in the slow cooker?

Absolutely. That is the beauty of a slow cooker you get to control the heat setting and so can cook for longer.

Just add the kale about 30 minutes before you want to serve your soup.

At the end of cooking the slow cooker lid can be removed and the soup left to bubble for extra time if you'd like to thicken up the soup more. Or remove the lid, turn the heat off and allow to cool slightly as the soup will also thicken as it cools.

What can I serve with peanut soup?

A bowl of this spicy soup is very satisfying and filling so lots of accompaniments are usually not needed. But here is a few ideas that I use for my family:

* cooked rice, ladle the soup over. Any variety of cooked rice can be used.

* cooked noodles, ladle the soup over.

* switch the black beans for your favourite pulse, black chickpeas if you can source them are perfect

* sub the sweetcorn for peas

* replace the white potato for sweet potato or butternut squash

* instead of dried onion and garlic, use fresh

* brown lentils can be replaced with any other whole lentil such as green, beluga, puy, etc

* kale can be replaced with any other green leaf veggie, however if using spinach it only needs mixing through the soup before serving 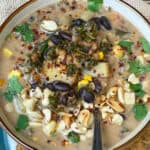 Print Recipe
This soup releases tantalizing and appetite stimulating aromas while happily bubbling away. So good to open your front door to be welcomed home to a bowl of this scrumptious soup especially on chilly fall and winter evenings.Serves 4-6 depending on appetites and accompaniments. This soup is satisfying and filling so 6 portions can be easily achieved especially when served with crusty bread.
Course Dinner, Lunch
Cuisine Asian inspired
Prep Time 15 mins
Cook Time 3 hrs 30 mins
Total Time 3 hrs 45 mins
Servings 6
Calories 394
Author Jacq

Added near end of cooking:

Toast the peanuts (optional, the nuts can be left plain or omitted)