This vegan Scottish traditional lentil soup is a family favourite bursting with wholesome flavours and deliciousness.

It's really easy and quick to prepare and perfect for meal prepping a large pot to enjoy for lunches and light dinners throughout the week. Lentil soup is perfect for the freezer!

Serve lentil soup with these quick vegan dinner rolls or quick 3 ingredient flatbreads and you have a perfect filling meal that everyone will love.

Growing up in Scotland lentil soup was a staple family dinner and I learned how to make lentil soup quite early on. My recipe for lentil soup is pretty much the same as my family recipe with perhaps the substitution for vegan stock cubes being the main difference.

Back then I was vegetarian as plant-based was not even a thing I could consider as I had not even come across the term!

Lentil soup is perfect for batch prepping and food budgeting. Lentils are relatively inexpensive and a small packet equals a large amount of yummy potential soup!

If you have kids this lentil soup recipe is ideal for them to prepare with supervision. My kids have successfully cooked batches of this soup and its a good recipe to have up-your-sleeve when you go off to college and need quick, easy, healthy, and inexpensive meal ideas.

Interestingly lentils are the oldest, farmed pulse and have been cultivated for thousands of years.

Lentils dating back 9,500-13,000 years were discovered within Franchthi cave in Greece.

There is even mention of bowls of red lentil soup in the Bible.

There are so many different types of lentils and recipes to discover. If you have little experience with cooking with lentils then vegan lentil soup prepared with red split lentils, is an ideal introduction as its just a case of bunging everything into the soup pan and simmering for 25-30 minutes.

And its ready to serve.

How do I store red lentil soup?

Lentil soup can be kept fresh in the fridge, within a covered container, for up to 3 days.

How do I reheat red lentil soup?

Reheat lentil soup in a saucepan over a medium heat. Bring to the boil and simmer for 2-3 minutes stirring frequently to ensure the soup is evenly heated and doesn't stick to the pan.

If the lentils have become very thick a little veggie stock or water can be used to thin down the soup for easier reheating.

If reheating from frozen ensure the soup is initially defrosted and then follow the method above. A microwave may help defrost the soup faster if you've forgotten to remove the soup from the freezer.

Can I prepare vegan lentil soup as gluten-free?

Simply ensure that your veggie stock is gluten-free and double check any ingredients used are also gluten-free.

What can I serve with Scottish red lentil soup?

Serve your soup with these delicious quick vegan dinner rolls.

These rolls use just a few ingredients and can be quickly baked while the soup is cooking. Serve hot from the oven. These are my kids favourite as they can be customised. Such as add some grated vegan cheese or nutritional yeast flakes for cheesy rolls, or some dried herbs, or garlic powder, etc.

Also these 3 ingredient flatbreads are also a delicious accompaniment as is a slice or two of this tasty vegan Irish soda bread.

I often serve red lentil soup with a veggie burger or hotdog (on a roll with some salad) on the side for dinner and the kids love this combination.

Another idea is to bulk out the soup with a portion of rice, quinoa, barley, millet or wheat grains underneath the lentil soup for a hearty, tasty meal.

Can I add anything extra to Scottish red lentil soup?

* This recipe is a no-oil one as I find oil doesn't actually add anything to the flavour.

So I just add everything to the soup pan and the result is just as tasty.

However, if liked a tablespoon of oil can be used to cook the onion, celery and garlic at the beginning for a few minutes, before adding the rest of the ingredients and veggie stock.

* Adding some green vegetables to the lentil soup is always a delicious idea. I prefer chopped kale, but collards, spring greens or cabbage can all be added 5-10 minutes before cooking is finished.

* A can of chopped tomatoes transforms the soup into a lentil-tomato soup. When I was a child my mum did this with leftover lentil soup to create a different flavour for the next day.

* Add a can or two of your favourite pulse such as kidney beans, butter beans, borlotti, pinto, etc. This can be a great way to stretch the soup further into more portions as well as increasing the soups iron and protein content.

* Half a cup of rice added to the soup can also bulk out the soup further but a cup of extra stock may be required.

* I often add a diced sweet potato if I have one kicking around the fridge needing used up.

* A few teaspoons of liquid aminos added to the finished soup can give the soup a meatier taste which mimics the traditional method of adding a ham bone to flavour the lentil soup as it cooks. Liquid aminos is quite a strong flavour and it is personal preference as to the taste so best to add a teaspoon at a time. Check out your local wholefood store, supermarket or Amazon for liquid aminos. 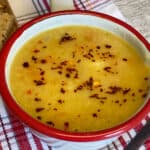