This recipe is a a veggie inspired recreation of Liverpool's, (England) traditional dish Peawack Soup.

Peawack soup has been around for at least 100 years.

Mention peawack soup to a Liverpudlian and you will more often than not stir up fond memories of their childhood when grandpa or grandma made the best peawack soup ever.

Peawack soup is a very friendly dish as its claimed that many years ago peawack soup was a community affair, where people would get together to prepare a large pot of it and share it amongst friends and neighbours.

The word 'wack' is Liverpool slang for 'friend' or 'fellow'.

The main ingredient in traditional peawack soup is the dried split peas, with red lentils and sometimes barley being included.

The soup is often prepared with a ham bone, hock, or knuckle to flavour the stock. Depending on what is available various vegetables are added such as carrots, leeks, swede, potatoes, and sometimes cabbage. Salt and black pepper provide the finishing seasoning.

Pea soup in one shape or form has been enjoyed by humans since at least 500-400 BC. During Roman times pea soup was a popular street food. The Romans often prepared a soup-stew like dish called pottage which consisted of peas and oats cooked to a sort of soft mush.

Historically, pea soup was the food of peasants and not the richer folks. However pea soup would have provided a pack of plant-powered nutrition!

For those interested I have a fun, interesting recipe for vegan medieval potage. My kids love preparing a pot of bubbling pottage around about Halloween time and just throwing in any thing they find from the fridge or cupboards!

Vegan peawack soup is my plant-based adaptation of the traditional peawack soup, so is not claiming to be an authentic recipe.

It will satisfy and warm you up on a chilly day. And best of all it will fill your family up with tons of plant-based goodness.

I have replaced the ham with Textured Vegetable Protein (TVP) which comes in dried chunks or mince form. TVP is generally made with defatted soya protein and is available in most health/wholefood shops. Some UK supermarkets stock it so its worth a check in your local one.

A 500 gram bag is usually less than £2 and seeing as its dried, TVP will rehydrate to just over double its weight. So a bag will do for a few good budget-friendly meals. TVP is often added to meat products as a way to bulk out the product at a cheaper cost.

To achieve a deep savoury flavour I added a teaspoon of vegetable yeast extract or marmite and a tablespoon of vegan Worcester sauce. I also use a vegan, plant-based 'beef' stock powder. (link provided in the recipe card)

If you can't find any vegan Worcester sauce, simply use tamari soya sauce or just regular soya sauce. Also vegetable stock is fine if plant-based 'beef' stock is not available. Incidentally, OXO currently has a meat-free 'beef' stock cube which is available in most UK supermarkets.

For vegan cookery often non-traditional ingredients need to be added to traditional based recipes in order to add more depths of flavour.

Dried split peas are a great source of protein and fibre

Dried split peas are a brilliant source of plant-based protein with 100g of cooked split peas containing 8.3g, and around the same amount of fibre.

A serving of my vegan peawack soup has an estimated 24g of protein per serving. And an estimated whopping 24g of fibre.

How do I store leftover vegan peawack soup?

Store leftover soup in a covered container in the fridge for up to 3 days.

Or place in a freezer-proof container and freeze for 4-6 months.

How do I reheat peawack soup?

Gently reheat the soup in a saucepan until piping hot throughout. Give the soup a stir frequently to avoid sticking.

If necessary add some more veggie stock to loosen up the soup as it will become very thick as it sits in the fridge.

What can I serve with vegan peawack soup?

A bowl of peawack soup is very filling on its own but for extra hungry appetites here are a few ideas:

What can I add or use to garnish peawack soup?

Of course! This is your soup and your meal so do adapt to what ingredients you have at home. After all that's what home cooks have been doing for centuries!

However, do keep in mind that the cooking times may need to be adapted depending on the sub.

*yellow split peas can be substituted for green split peas.

Any top tips for preparing the best bowl of vegan peawack soup?

* Add a teaspoon of bicarbonate of soda to the yellow split pea soaking water. Doing this helps soften up the peas reducing the cooking time and it may also help reduce potential flatulence! Don't cook with the soaking liquid always discard.

* If you forget to soak your split peas overnight, then pour boiling water over the peas, and leave to soak for a few hours.

* Try not to use old or past the best-before-date split peas for this soup as older peas can take so long to soften up. If you would like to use older peas perhaps pre-cook before adding to the soup.

* For a quicker soup pre-cook the split peas for 30 minutes before using. And perhaps use less veggie stock for the soup recipe as pre-cooked peas will absorb less liquid. Split peas can be pre-cooked a few days in advance and kept in the fridge.

How To Prepare Vegan Peawack Soup: 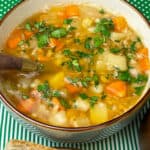