Vegan roast pumpkin, sweet potato and red pepper soup is an easy, wholesome, delicious soup that is perfect for lunch, dinner, starter or simply as a nourishing snack.

Serve with an optional drizzle of vegan cream, sprinkle of red pepper flakes and deliciously toasted sunflower seeds. So good.

A bowl served hot or chilled is ideal served as part of a special holiday meal especially Thanksgiving, Christmas or New year celebrations.

Pumpkin soup dates back to 17th Century America and is a popular dish that is commonly served during an American thanksgiving meal. American colonialists first developed a pumpkin pie of sorts after seeing Native American's enjoying roasted pumpkins as a valuable food source. Pumpkin soup would have come later.

Other countries have their own version of pumpkin or squash soup including Africa, Asia, Australia and some European areas. A spicy squash soup is a favourite in Haiti and is a popular dish served during their New Year celebrations.

Preparing this soup is so easy with no long simmering on the stovetop required. Instead the pumpkin, sweet potato, red pepper, and onion chunks are roasted for 35-40 minutes with tasty garlic and fresh thyme.

No oil is required to roast the veggies to perfection but if preferred drizzle a tablespoon or two of olive oil over the veggies. Alternatively a swivel of balsamic vinegar would be delicious.

Once roasted the veggies are added to the soup pot along with some hot vegan chicken flavoured stock. Although any vegan stock can be used instead. Once the soup is seasoned with salt and pepper it is blended smooth using an immersion stick blender.

The smooth, silky pumpkin soup is heated through before being served with a garnish of vegan cream, toasted sunflower seeds and red pepper flakes.

Dry toasting sunflower seeds only takes a few minutes. A small non-stick pan is heated for a few minutes along with the seeds, a few twigs of thyme and a sprinkle of salt. Once the pan is very hot it can be taken off the heat and gently shaken back and forth so that the seeds brown nicely and evenly.

The toasted sunflower seeds are a tasty snack and any seeds or nuts can be substituted. Delicious.

This pumpkin soup recipe feeds 4 good sized portions or it could be stretched to 6 smaller bowls especially if feeding kids or using the soup as a starter.

How do I store leftover vegan pumpkin soup?

Leftovers can be stored within a covered container in the fridge for up to 3 days.

Or frozen, minus the garnishes, for up to 4 months. Defrost completely before reheating.

How do I reheat leftover vegan pumpkin soup?

Pour leftovers into a pot and gently bring to the boil, reduce the heat, and simmer for 3-4 minutes or until piping hot. Stir frequently.

Do I have to roast the veggies?

Of course not but roasting the veggies does add so much more flavour and is highly recommended.

Also roasting the veggies cuts down the length of time needed to cook the soup on the stove top.

Once roasted the soup simply needs blended and then heated through.

Of course if preferred the veggies can be sautéed in a tablespoon of oil or half a cup of veggie stock for around 10 minutes before the stock is added. Bring to a simmer and cook until everything is soft, and then blend until smooth.

Does the vegan pumpkin soup need to be blended?

Absolutely not. Some people prefer a chunkier soup so blending is not a requirement. Although blending does lead to the pumpkin lending the soup a silky, yummy texture that my family likes best.

If you are not going to blend the soup the veggies could be chopped into smaller pieces before roasting otherwise your soup may resemble more of a stew.

I use an immersion blender but a food processer or larger counter top blender or smoothie mixer could be used instead. Although it may be best not to pour boiling hot soup into a plastic blender, so do consult your appliances guidebook.

Can I add any thing to this roast pumpkin soup?

Add any flavours you like if you are not too keen on fresh thyme or can't find thyme anywhere. A few ideas:

* instead of pumpkin use butternut squash, acorn squash, etc

* replace the sweet potato for carrots or ordinary potatoes

* a yellow or orange pepper can replace the red pepper

* instead of thyme try some fresh sage, rosemary or parsley

* instead of sunflower seeds, toast some pumpkin seeds or chopped cashew nuts, walnuts or peanuts

Absolutely. All that needs to be considered is that a gluten-free veggie stock is chosen.

And any herb or spice mixes that may be used are also free from gluten ingredients.

Also if using a shop-bought vegan cream ensure that it is gluten-free.

What can I serve with roast pumpkin soup?

* a wedge or slice of your favourite bread

* a big crispy green side salad

* a few wee spring rolls, pakoras, or samosas on the side are a very tasty accompaniment 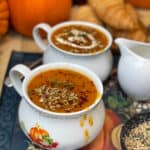