Vegan Welsh Cawl Soup [adapted from the traditional welsh lamb soup or Cawl Cymreig] is a rather thick chunky soup or stew that is ideal for wholesome, hearty, tasty budget-friendly family meals.

Ladle this easy and quick soup into bowls and garnish with pieces of cooked smoky vegan bacon and fresh parsley.

And serve with chunks of crusty bread and a wedge of vegan cheese for a traditional Welsh experience. Albeit a meat-free one!

Veggie Welsh Cawl soup can be easily prepared as gluten-free.

Welsh Cawl Soup is the national dish of Wales and originates way back to Welsh medieval times. The Welsh word Cawl translates to mean soup or broth.

A large pot of Cawl soup would have bubbled away on the open fire for hours ready to feed the hungry family at the end of the working day.

The broth was usually a meat and veg one and the ingredients would have been whatever was available so recipes do vary. The meat was generally lamb, but bacon or beef may have also been used.

The traditional vegetables used for Cawl soup tend to be of the root variety such as turnips [swede/rutabaga], carrots, and parsnips. Potatoes would have been added to the Cawl soup sometime after they had arrived in Britain during the 16th Century.

Nowadays Welsh Cawl Soup is popularly served as a one-pot meal, with home-made crusty bread and a wedge of the Welsh speciality Caerphilly cheese.

For this veggie Cawl soup recipe I have used dried textured vegetable protein [TVP] or soya chunks as they are an inexpensive protein source, soak up the soup flavours, and add texture to the finished soup.

Of course, feel free to sub the TVP chunks for your preferred meat alternative either dried, fresh or frozen or simply omit. A can of drained beans or chopped thick mushrooms could also replace the TVP and would provide valuable nutrition to the soup.

Before beginning the soup, hot vegan stock is prepared and the soya chunks dropped into the stock to soak up the flavours.

The Cawl soup begins by sauteing the veggies in a tablespoon of vegan margarine as this adds extra flavour as well as calories to the veggie soup which is actually quite low in calories and fat.

However, if you are following a no-fat or oil diet then do cook the veggies initially, with a little veggie stock.

The vegetables required for this Welsh Cawl soup is carrot, turnip [rutabaga], onion, leeks, and potatoes. Some recipes also include parsnips so if you have one lurking around your fridge needing used up then do throw that in to the soup as well!

Once the veggies have sautéed a sprig of thyme and a bay leaf is added, along with a few tablespoons of soya sauce, a tablespoon of white wine vinegar and the vegan stock/broth along with the TVP chunks.

Now all that needs doing is for the Cawl soup to gently bubble away, the veggies to soften and the soup to thicken up. Depending on the thickness of your veggies this can take anywhere between 30-45 minutes.

Cawl soup is designed to gently bubble away so feel free to leave the soup until required. Of course do check the stock/broth levels frequently as extended cooking will likely require a top-up of veggie stock.

As with all tasty vegan soups and stews the flavours just improve and develop the longer it sits in the refrigerator so to save time and energy do prepare the soup a day in advance.

To serve the soup a few rashers of cooked vegan bacon sliced into pieces, is delicious as is a sprinkle of fresh parsley or your favourite herb.

If preferred a few chopped cooked vegan sausages or meatballs can replace the vegan bacon, or perhaps a few slices of ripped up vegan Quorn smoky ham deli slices. Or even some chopped smoked tofu.

A big chunk of crusty bread along with a wedge of vegan cheese is an authentic accompaniment to a delicious Welsh soup.

I served up the Asda own brand of vegan Free From garlic and chive cheddar alternative cheese which was particularly tasty especially when little bits of the cheese was crumbled into the soup and allowed to melt.

This recipe for Vegan Welsh Cawl Soup is such a wholesome budget-friendly frugal meal that is easily adaptable, and can be served with various different toppings and accompaniments, that it really needs to be part of your menu rotation.

Especially during our cost of living crisis and food shortages that seems to be mostly world wide!

This blog is packed with our everyday family plant-based meals and I need to work with a budget and the limitations of living on a small Scottish island with no major inexpensive supermarkets at hand.

So it is tough, especially now, but I aim to prepare and cook frugal but wholesome recipes. So do keep coming back to the blog and to check out what money-saving recipes I have posted lately!

Most of the veggies I use for my recipes are reduced sticker finds so I do recommend looking regularly at the reduced sections of any supermarkets you have available, if this is possible. And freeze what you don't use for future recipes.

Do let us know how you got on with the veggie adapted version of Welsh Cawl Soup. We love to hear from you!

How do I store leftover Cawl soup?

Leftover soup can be cooled and placed in the refrigerator within a covered food-safe container. Store for up to 3 days.

The flavours of leftover Cawl soup gets better as the days go on so if possible do prepare the soup the day before serving.

Can I freeze Cawl soup?

How do I reheat Cawl soup?

Pour the soup into a pot and gently reheat until piping hot.

Once the soup has come to the boil, lower the heat, and simmer for 2-3 minutes.

What can I serve with Welsh Cawl soup?

Anything that you would normally enjoy with soups or stews!

* a splodge of brown sauce/tomato ketchup

* a sprinkle of nutritional yeast flakes

* pickled cabbage [dice and add as a garnish]

* pickled relish [such as Branston pickle]

Can I substitute any of the ingredients for Welsh Cawl soup?

Adapt the recipe for your own preferences and requirements, as all good cooks do!

* the textured vegetable protein chunks/pieces can be replaced with any vegan meat-free alternative you wish either dried, fresh or frozen.

* Vegan sausages, burgers or meatballs can be sliced into smaller pieces and replace the TVP. It may be best to pre-cook vegan sausages etc before adding to the soup near the end of cooking, to preserve the texture and flavour.

* replace the TVP with a 400gram/14oz can of drained beans, or sliced large mushrooms or leave smaller mushrooms whole, or chopped pieces of seitan or tempeh.

* Instead of vegan margarine or butter to saute the veggies, replace with ½ cup of veggie stock

* Instead of fresh herbs use dried varieties

Can I prepare vegan Welsh Cawl soup as gluten-free?

Simply ensure that your vegan stock is free from gluten-ingredients, and choose gluten-free Tamari soya sauce as opposed to regular soya sauce which tends to be prepared with wheat.

TVP is usually gluten-free but do check, and use a different gluten-free meat-free alternative if necessary.

Also ensure that if using vegan bacon and cheese that it is also free from gluten.

For another vegan adapted traditional Welsh recipe try a batch of these delicious Welsh Bakestone Cakes. 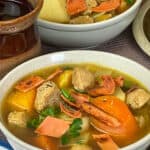 Add at end of cooking

To serve, optional: chunks of crusty bread, wedges of vegan cheese [such as Asda [UK] Free From chive and garlic cheddar alternative]

While soup is cooking prepare the bread, vegan bacon, vegan cheese and fresh parsley, if having.

Do let us know how you got on and post a comment below. We love hearing from you.