This vegan cream of swede (rutabaga) soup is based on an old fashioned British recipe and produces such a surprisingly delicious flavour that is perfect for a festive or Holiday meal starter, quick lunch, light supper, or even a tasty snack.

Serve with tasty, toasty, crispy croutons, fresh parsley and an optional swirl of vegan cream. So yummy, the whole family will love this wholesome dish.

Swede's are termed rutabaga's in the US, and neeps in Scotland. Although here in some parts of Scotland we also call a swede a turnip! So for this recipe use either turnips, swede, rutabagas or neeps. They are all equally tasty.

Origins Of Swede And Swede Soup

The vegetable swede is also known as a rutabaga, Swedish turnip, yellow turnip, turnip and neeps. Here in Scotland a swede is commonly referred to as a turnip, tumshie, or neeps. Despite also having the smaller, creamier coloured turnips available to buy as well.

Interestingly a swede is actually a cross between a turnip and cabbage! Fascinating.

Swedes made their way over to the British Isles sometime during the late 1700's and over to the US during the early 1800s. The first recorded swede was discovered in Sweden sometime in the 1600s.

Since then swedes have become a valuable food crop both for people and livestock, as it is hardy and can be grown throughout the winter months.

In Scotland and many other places within the UK, swedes used to be carved into Jack-o-Lanterns during Halloween instead of the now popular pumpkin.

Many countries around the world feature swede or rutabagas in soups and stews. From the Eastern European swede soups, to the traditional Irish stews, the Scottish Scotch broth soup and the Welsh cawl soup.

Cream of soups have been popular in Britain for centuries and when the swede was introduced it would have naturally been added to the cooks repertoire of creamy soups.

I love this cream of swede soup for many reasons. It has a delicious thick savoury texture with a hint of sweetness. The crispy croutons bring delicious apple cider vinegar tangs mixed with the cheesiness of the nutritional yeast and the savoury herbs. The parsley brings fresh flavours. Everything just works beautifully, yet so inexpensively and simply.

Swedes are often found in the reduced price section of the supermarket and are perfect for storing in the fridge for at least a few weeks. They keep amazingly well. So this soup works out quite cheap, yet will taste better than a fresh soup from the supermarket chilled section.

To begin, the swede is peeled and diced, before being slowly cooked in vegan butter for 15-20 minutes. This method releases and develops all the sweet, yummy flavours the swede naturally possesses.

Next hot vegan stock is poured into the stewed swede, along with some soft/light brown sugar, and salt and black pepper. The swede soup is brought to a boil, and simmered for 10 minutes or until the diced swede is nice and soft.

To create the thick creaminess plant milk is whisked with the plain flour, and poured into the swede soup. The soup is blended using an immersion hand blended until smooth. Although a food processor or stand blender could be used instead. Failing that strong arms, patience and a potato masher could be employed!

Once smooth the soup is brought to a gentle simmer, and heated for a few minutes. It is important not to fast boil the soup so as to prevent the plant milk splitting. Although if this does occur it can be easily fixed by mixing well.

Lastly the swede soup is seasoned with enough salt and black pepper to bring all the flavours together.

Preparing the crispy croutons could not be simpler. These little crispy morsels can be baked while the soup cooks.

Each slice is cut into four long strips and then each piece is diced into four croutons. However, the size and shape of the croutons is personal preference and the croutons can even just be ripped into rough, rustic shapes.

Next the croutons are tossed with the apple cider vinegar, dried herbs, and nutritional yeast flakes, before being laid out onto a baking tray.

The crispy croutons are baked for 10 minutes, flipped over, and baked for a further 3 minutes.

These croutons are just so tasty. If possible I do recommend giving them a go. Use a gluten-free bread if necessary, but if you really don't enjoy croutons then check out the recipe notes and FAQs section for more delicious ideas.

How do I store leftover cream of swede soup?

Leftover cream of swede soup can be stored within a covered container for up to 3 days. Or frozen for 2-3 months.

Freeze without the croutons, parsley and oat cream garnishes. These are best added freshly prepared before serving the soup.

Can I reheat cream of swede soup?

Bring the leftover cream of swede soup to a gentle simmer in a non-stick pot, for 2 minutes or until just piping hot. Do not fast boil the soup as it contains plant milk that could split. Although even if the soup does split just mix it well, the flavour is not compromised.

Is vegan cream of swede soup suitable for a gluten-free diet?

Links to recipes containing the methods for the following:

Just ensure that any ingredients used to prepare the above substitutions are gluten-free.


Can I make any changes or substitutions?

* replace the swede with turnips

* add extra flavours such as grated nutmeg, a few cloves, fresh herbs such as sage, rosemary and thyme, your favourite dried herbs or spices such as red pepper flakes/paprika flakes

* add some nutritional yeast flakes to the soup

* see the above question for sub ideas for the croutons

* instead of nutritional yeast flakes for the croutons replace with your choice of seasonings or seasoning blend, such as garlic/onion powder, paprika, red pepper/chilli flakes, etc.

What can I serve with vegan cream of swede soup?

Vegan cream of swede or rutabaga soup is perfect for a special festive or Holiday meal starter so can be enjoyed alone as a second course will follow.

However if enjoying swede soup as a light lunch or dinner, here are a few serving suggestions: 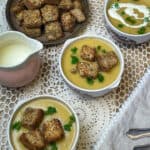