Vegan creamed beef and barley stew is so easy and quick to prepare in one pot. This stew will quickly become a go-to meal as its a guaranteed winner with all the family.

Packed with plant-based nourishment as well as creamy, savoury tastiness, this stew is perfect for everyday meals, or for impressing guests over the holiday season.

Not a fan of meat-free pieces? Simply sub these out for a can of your favourite beans or some thick sliced juicy mushrooms. So tasty!

Quick Origins of Beef And Barley

Here in Scotland barley has been a common crop and ingredient for at least hundreds of years.

One of Scotland's most popular soups is Scotch broth which features barley simmered with meat. We have a delicious vegan version of Scotch broth on our blog, do pop over and check it out, a bowl is perfect for autumnal and winter lunches.

Combining beef and barley into soups, stews and pottages goes further back as barley was first cultivated in Eurasia 10,000 years ago.

The ancient Roman gladiators were sustained on barley and were often known as 'barley men'!

In early American history barley was transported along with the new settlers and was used to prepare meat and barley soups.

Preparing this creamed beef and barley stew is so simple and quick. This stew can be easily adapted to whatever veggies you happen to have to hand, as well as easily prepared as gluten-free.

First select your best non-stick pot and cook the thick sliced parsnips, carrots, celery and onion in either one tablespoon of olive oil or half a cup of veggie stock. Next the dried herbs and garlic are cooked for a further two minutes.

Barley and meat-free pieces are next to go in the pot, followed by hot veggie stock and a tablespoon of vegan Worcester sauce. I used 2 meat free beef oxo cubes to prepare the hot stock, but any other vegan beef flavoured stock can be added. Or if you only have vegetable stock just use this.

After some seasoning of salt and black cracked pepper, the stew is brought to the boil, and simmered for thirty minutes, and given an occasional stir.

If any sides are being served along with the stew now is a good time to get these going.

After thirty minutes shredded cabbage is mixed through, along with canned coconut milk and white wine vinegar. The stew is gently simmered for a further fifteen minutes.

After fifteen minutes the seasoning is checked and the coconut milk stock given a good mix, as it can look separated at this stage. However just mix well and it will come back together again.

My family love this creamed barley stew served over fluffy mashed potatoes, with a slice of crusty bread to mop up the tasty creamy stew juices. I like a sprinkle of fresh parsley while my son prefers the tomato ketchup bottle!

If needing a gluten-free version, substitutions or serving suggestions then do check out the recipe notes and FAQs.

How to prepare vegan creamed beef and barley stew

How do I store leftover creamed barley stew?

Leftovers can be stored in the fridge for up to 3 days, within a covered container.

Or frozen for up to 4 months.

How do I reheat leftover barley stew?

Place the barley stew into a non-stick pan and reheat for 3-5 minutes or until piping hot. A little extra liquid may be required if the stew has become very thick, although as the stock heats it will become looser.

Yes with a few considerations this stew can be prepared as gluten-free.

As barley is not a gluten-free ingredient this will have to be replaced. Rice is the best replacement but be sure and adjust the cooking times depending on how long your chosen rice takes to cook.

Lastly choose gluten-free meat-free pieces or sub out for a can of your favourite beans or the same weight in mushrooms.

Of course. A few ideas:

* sub out parsnip for potatoes, turnip, swede or celeriac

* instead of canned coconut milk use the same amount of soaked and blended cashew nuts and water. Have a look at our creamy cashew Moroccan stew post for an easy method.

* any type of cabbage can be used, including savoy, white, green cabbage or spring greens.

Red cabbage is fine but will add extra colour to the creamy stock.

Other greens can also be used such as kale, collards, Calvo Nero, cauliflower or turnip greens.

* not a fan of meat-free pieces? sub these out for a can of your favourite beans, or the same weight in juicy, thick sliced mushrooms. Any variety of mushrooms is fine.

What can I serve with creamed barley stew?

* a wedge of your favourite crusty bread

* vegan champ ( a traditional mash of potatoes, turnip and cabbage)

* steamed or boiled peas and sweetcorn

* any steamed or roasted veggies, steamed green beans or roast asparagus are especially tasty with this stew 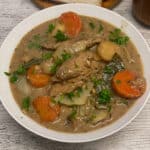 To sauté the veggies