My traditional Vegan Scottish Stovies recipe is based on the stovies my family prepared when I was growing up in Scotland.

Stovies are in essence fluffy potatoes stewed with lots of juicy sweet onions within a rich, savoury gravy.

Stovies are the perfect meal for busy people as simply stick everything in the pot and leave to bubble and stew creating the most flavourful gravy.

Stovies are perfect for any day but especially for having with a Scottish themed dinner party or meal, Hogmanay/New Years dinner, Robert Burns day dinner (25th January) or as part of a St Andrew Day celebration (30th November).

What are Scottish Stovies?

The word Stovies is a Scottish word meaning to stew.

Historically the main ingredients of stovies are simply potatoes and onions. Pieces of leftover meat were a popular addition but only if it was affordable and available. I remember my mum using link sausages, large chunks of potatoes and onions sliced into rings. Everything was stewed within a thick gravy.

Stovies date way back to sometime during the 16th-18th centuries, when servants would used the leftovers of their employer's dinner to create their own meals.

In more recent history, excess meat from the Sunday roast as well as the fatty dripping that collected in the roasting pan was combined with potatoes and onions, and stewed to create the Monday meal.

Nowadays Stovies are commonly served in pubs, inns and restaurants in Scotland. As well as being the dish of choice for many Scottish newly-weds at their wedding feast.

Robert Burn's night dinners often feature stovies on the menu, and New Years Eve celebrations are another excuse for Scottish people to have stovies.

How should Scottish stovies be prepared?

There's a great deal of contention about how Scottish stovies should be prepared. Everyone has their own way of preparing stovies and it usually depends on which area of Scotland you grew up.

Some use traditional or square sausages, or corned beef, sausages, leftover roast, etc.

Many prefer their potatoes mashed up well after cooking. Other variants are cubed, sliced or whole potatoes. A few versions do not have much gravy at the end of cooking and is just a mashed up concoction!

Historically traditional recipes don't even call for meat, and just focus on the potatoes as the star of the dish stewed in gravy. Stovied potatoes and onions are a delicious simple dish especially served with some crusty bread to soak up the gravy.

Traditionally leftover pieces of meat are added to the stovies.

This plant-based stovies recipe features a packet of vegan sausages as my mum would use sausages with her stovies.

However, soy curls, soy chunks, tofu pieces, tempeh, chopped up vegan burgers, anything you have can be added.

Or simply omit and enjoy traditional stovied potatoes and onions, with a chunk of crusty bread to mop up the delicious plant gravy juices.

How do I store and reheat leftover stovies?

Leftovers can be stored in the refrigerator, in a covered container, for up to 3 days.

Or frozen for 4-6 months in a freezer-proof container.

How do I reheat vegan Scottish stovies?

If frozen defrost before reheating.

Simply add stovies to a saucepan and bring to a simmer. Reheat for 3-5 minutes until piping hot. Add extra water or veggie stock if required.

Is this recipe for veggie Scottish stovies gluten-free?

Yes with a few changes veggie Scottish stovies can be prepared free from gluten.

Ensure that the plant-based vegan sausages are gluten-free, as well as the vegan stock and vegan Worcester sauce.

Also use tamari soya sauce as it is usually gluten-free, but do double check. Vegan Worcester sauce can be replace for gluten-free Tamari soy sauce if necessary.

What can I serve with vegan Scottish stovies?

Can I add anything extra to Scottish stovies?

It's not traditional but I often add a few cups of chopped kale to my stovies just because I love adding extra nutrition and green veg whenever I can to a dish.

Besides the kale is a traditional Scottish veggie and it tastes good in the plant-based gravy.

I'm not keen on vegan sausages can I use something else?

As said before it is traditional to just have stovies as potatoes and onion so no other additions are really needed but an extra protein does add texture, flavour and can be more filling.

* About half a cup of dried barley. Barley is a Scottish crop so your dish will still be Scottish. Add the barley to the Stovies at the beginning of cooking. Your gravy will likely be thicker.

* can of drained butterbeans or your favourite bean

* any variety of mushrooms

* Instead of the various flavourings use a vegan gravy powder to thicken up the stock that is created by stewing potatoes and onions.

* Use up small bits of leftover potatoes for these stovies. Prepare the recipe as stated below then add the leftover potato as an additional ingredient. Just chuck these in about ten minutes before the end of cooking, even small bits of mashed potato can be used, this can reduce waste and may add an extra portion.

* Save your potato or veggie cooking liquid from previous days and use this liquid to prepare veggie stock if your using stock cubes/powder or bouillon paste. Less waste and more flavour!

*I use Maris Piper potatoes as they become lovely and fluffy in the stew, but any potato variety is fine. I have even used new potatoes. If your potato skins are unblemished omit the peeling and enjoy the extra nutrition.

* Leftovers are tasty for lunch the next day with a wedge of wholemeal bread or slice of toast.

How to prepare vegan Scottish stovies

How to prepare mashed neeps (turnip) as a side-dish 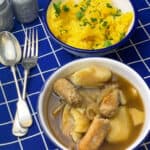 For the mashed neeps:

Back to the stovies: